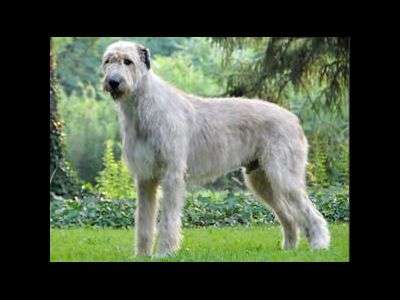 Surprisingly, wolves have long been part of the folklore and legend of Ireland, and were common in the countryside until 1786, when the last one was believed to have been killed. The Irish Wolfhound, named for its purpose, (hunting down wolves) rather than its appearance, soon fell out of favour with the disappearance of the wolf, and came perilously close to extinction.

During the nineteenth century, a man by the name of Captain George Augustus Graham set about reinstating the breed, by searching out the last few remaining specimens and breeding them with other hounds such as the Borzoi, Deer Hound, and with the Great Dane. His goal was to bring back the original type and size of the Irish Wolfhound. In 1885 he founded the Irish Wolfhound Club, which continues today, and holds annual shows and other activities specifically geared toward the breed.

The Irish Wolfhound's coat comes in a wide range of colours, from the palest cream to black. Also seen are different shades of red, and wheaten. The coat can be with or without brindling. Some Irish Wolfhounds appear to be a shade of blue. This is more correctly called blue dilute, but in days past this was believed to be a serious flaw, and many puppies were put down because of it. It was erroneously thought that dogs of this colour would be deaf and blind, and would likely not survive to adulthood. In fact, the blue dilute gene is harmless and is seen in many breeds. The Irish Wolfhound may have white markings on the feet and tip of the tail, but any further white markings are not acceptable, according to the breed standard.

While the Irish Wolfhound is the tallest known breed, even taller than the Great Dane, it is by no means the heaviest. The desired height is a minimum of 31 inches, and a comparably low weight of 120 pounds for males, females being relatively smaller. They should have the grace and general appearance of the Greyhound or Deerhound, with a high head and neck carriage and a sweeping tail. Endurance is an essential part of this breed's heritage, so they should have a strong muscular appearance, with effortless movement. Dark eyes are characteristic and contribute much to the expression.

Although the Irish Wolfhound was originally bred to hunt and kill wolves, it is very gentle and affectionate around people, particularly children. It's important to remember, however, that this doesn't necessarily apply to other animals. While they will accept and generally get along with other dogs, they will chase, and possibly kill small animals such as rabbits or cats. This is an inevitable part of their breeding, and if you choose to have this breed, or any other type of hound, you must be prepared to accept this, and not punish the dog for what is natural behaviour.

As with every breed of dog, it's essential to research the dog's inherited qualities and temperament, as well as its health and grooming needs. In order for you to have a harmonious relationship with your pet, you must be aware of and be able to live with its particular traits. One of the main reasons that so many purebred dogs end up in shelters is lack of preparedness by the owners. You owe it to yourself, and especially your dog, to be aware of what you can expect from your chosen breed.