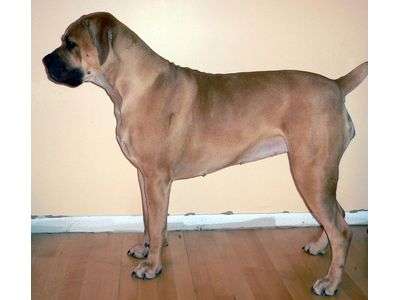 This classic working dog is very friendly and makes a great pet. With good training and care the Boerboel displays a friendly and kind temperament that makes it a joy to be around.

This classic South African breed is a real breeding success story and the Boerboel has been developed over the years to bring out its excellent muscle tone and strength. The Boerboel is believed to descend from a bullenbijet, which was brought to the Cape by Jan van Riebeeck. When British settlers arrived in the Cape in 1820 they brought a number of strong and large dogs with them such as the Mastiff and the Bulldog. This resulting breed is also known as Boerdogs and were crossbred with the English Bulldog as well as the Bull Mastiff in the 1950s.

This strong and large dog is very intelligent and features good muscle development combined with buoyant movement. Sexuality is pronounced in the Boerboel and female dogs are characteristically feminine, while the males are masculine. The Boreboel’s head is its most striking and defining feature and is short and broad while also being muscular and square with full cheeks. The top of the head is flat and broad, while it also displays good muscle development. The face is characteristically symmetrical and features a black muzzle with large, widely spaced nostrils. The nasal bone is around 10 centimetres long and is very straight. The breed features a fleshy upper lip, while the jaws are strong with strong teeth that come together in a scissor bite. The tail is short and straight, while the legs are also very straight. The chest is broad, deep and very well muscled, while the dark, curved toenails are particularly definitive. The coat is short and dense and can come in a wide variety of colours including pale tawny, creamy white, reddish brown and brindle.

This breed is very playful and loves to interact with children. The Boerboel is very intelligent and obedient and displays good watch dog characteristics. Because the Boerboel is very protective of its family it sometimes does not take well to strangers. Care should be taken to introduce the dog to strangers so that it does not see them as a threat. The breed interacts well with other animals and loves to play at any opportunity, even playing with birds and other small animals. The breed occasionally needs a firm hand so that it understands its place in the pack and does not try to display dominant characteristics. If the Boerboel does not get enough exercise it has a tendency to become withdrawn. However, its energetic nature means that it generally simply needs a large space to run around in, although it should also be taken for a long walk every day.

This is a very healthy breed and there are no known associated health problems.

This is a large and very active breed and it is not suitable for apartment life. The Boerboel does not suffer from the heat or cold and can comfortably live outside as long as it is provided with some form of shelter.

The Boerboel requires a garden to run around in and loves to play ball games and take part in other activities. The short coat of the Boerboel is easily to groom and requires only occasional brushing as well as a bath once a month.