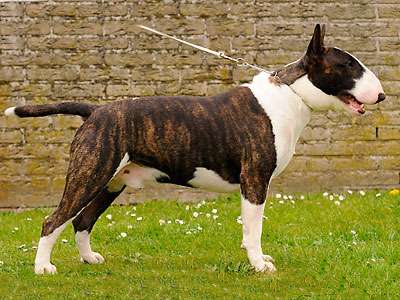 With its unique egg-shaped head and constant quizzical expression, the bullterrier may fool some people into believing that it is of below average intelligence, which is probably what it is aiming for. It is certainly a good strategy if this dog constantly needs to be forgiven for the short-lived periods of insanity that seems unique to its breed. From a rocketing start, this animal will race around the house at breakneck speed, narrowly avoiding fatal collisions with furniture or any other obstacle in its path, and then return to its original position at its stunned owner’s feet and simply lie there grinning. This manic behaviour needs to be treated with the utmost suspicion, because the bullterrier is, in fact, a highly intelligent animal.

The size and weight of a bullterrier can vary quite substantially, but they generally stand approximately 22 inches tall at the shoulder, and can weigh anywhere between 35 and 75 pounds: Most of this is solid muscle. Besides the head being shaped like an egg, the skull is almost flat and the under-jaw is deep and powerful. The bullterrier also has small, triangular and deep set eyes that are unique to the breed. Its coat is short, flat and wiry and can be a variety of colours, including solid white, often with patches of colour.

The bullterrier is often compared to a high-spirited child that needs consistent, but reward-based correction to its behaviour and it is an apt comparison. Just like a child, they can be obstinate in their belief that their way is the only way, but a firm and consistent hand can persuade them to accept the possibility that they may be wrong. Bullterriers will only surrender their independence if it is made abundantly clear that their way poses quite a few problems to a happy family scenario.

The owner of a bullterrier needs to set clear and consistent boundaries if the dog is to conform to expected behaviour. It takes stamina and determination for an owner to convince this dog that a peaceful family setting is only possible if every member follows the rules, because it can seem to ask more ‘why’ questions that the average three-year-old. Just as with a child, the answers should be given emphatically and with an enticing reward system in place. This breed does not respond well to aggression.

Bullterriers may enjoy rough play, but they do not appreciate physical force during training and may react with some aggression of their own. Leadership must be established by sheer force of will rather than brute force for this dog to learn respect for its owner. Be consistently firm, kind, patient and courageous and it will respond with utter respect and devotion. This is basically a one-family dog, with all members of the family having to establish their superior status.

Bullterriers should be socialised at an early age, especially where other dogs are concerned, as they can be extremely territorial regarding space and family. Rewarding this dog with tempting treats for good behaviour will work as well as it does in the disciplining of a young child. Play with this breed hard and often and ensure that it has ample opportunities to work off that enormous store of energy and it will happily settle down to rest.

Do not leave the bullterrier alone for any length of time, as this equates to a child beginning to suffer from boredom and a sense of abandonment. Allow them to stay close and they will develop a sense of security that discourages rebelliousness.