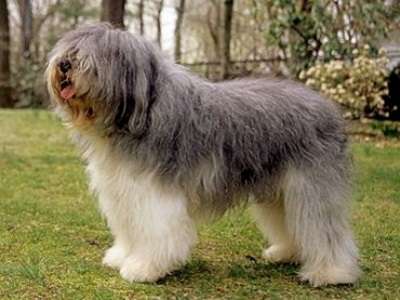 The Polish Lowland Sheepdog is also known as the Polish Owczarek Nizinny and originally worked on the lowland plains of Poland and Hungary. The breed is believed to have evolved from ancient corded herding dogs and many breeders believe that it is also related to the Lhasa Apso and the Tibetan Terrier. After nearly becoming extinct in Wold War II, the Polish Lowland Sheepdog was revived by Polish breeders and is particularly popular in Poland and surrounding countries. Although this breed has retained its excellent herding skills, these days it is mainly kept as a household companion and also displays tracking and agility skills. The Polish Lowland Sheepdog was recognised by the American Kennel Club in 2001.

This medium sized breed features a slightly domed and moderately broad head. The ears ate heart shaped and set fairly high on the head, while the eyes tend to be brown or hazel, although they can also be blue. The back is broad and level, while the thighs and loins are broad and well muscled. The coat is wirehaired and features a soft under layer, while the most common coat colours are grey or white mixed with either black or grey. This breed has a noticeable amount of hair on its cheeks, forehead, legs and chin.

This breed is extremely animated and will be happy and affectionate as long as it receives enough attention. The breed tends to be distrustful of strangers and will announce the presence of visitors by barking loudly, although if the dog is socialised well from an early age it can learn to take to strangers and do well around them. The breed has a tendency to try to become the pack leader and must be given a firm hand right from the start so that it learns its place in the ‘pack’. However, if properly trained the Polish Lowland Sheepdog is obedient and eager to please and is excellent with children, especially children that are willing to spend plenty of time playing with it outside. Due to its adaptable nature, the Polish Lowland sheepdog makes an excellent travelling companion, although care should be taken to prevent its herding instincts such as nipping ankles and heels, from manifesting.

The Polish Lowland Sheepdog is a very hardy breed and there are no real associated health problems.

This breed prefers cool climates and can sleep outside, although it can adapt to apartment life as long as it is given plenty of exercise.

This is a working dog at heart and is not really suited to town or city life unless it receives a lot of exercise and stimulation. Ideally, the Polish Lowland Sheepdog should have a large outdoor space where it can run around and an owner who has the time and commitment to play games such as Frisbee and catch every day. The Polish Lowland Sheepdog needs at least two brisk walks every day. The long and wirehaired coat needs thorough grooming once a week to make sure that it does not become matted, while this breed does not shed, making it a great companion for allergy sufferers.