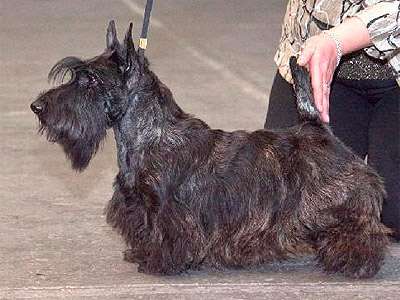 The Scottish terrier is small in size only. Generally standing at around 10 inches in height and weighing between 18 and 22 pounds, it seems to be under the firm illusion that it is far larger in stature and displays the confidence and bravery expected of a Rottweiler. Perhaps it is this breed’s aristocratic appearance that has it fooled.

With a beard and eyebrows that were fashionable among the aristocrats of old, the Scottish terrier seems to adopt the appropriate dignified bearing. It also dresses accordingly, with a dense undercoat and an overcoat made of long, wiry fur in black, brindle or wheaten that often displays sprinklings of silver. Despite its incredibly short legs, this dog is heavy-boned and packs some formidable power into a compact body, with the deep bark to prove it.

The Scottish terrier is an independent adventurer that was originally bred as a hunter of smaller prey, and his vigorous digging up of a garden is an expression of this. It is also constantly ready to defend itself, which does not make it the ideal companion for small children, as any unintentional roughness could result in a few nips. It is also not very trusting of strangers, and these traits make early socialising a must. However, let this dog know its place in the pecking order and it could transform into a loving, loyal and considerate companion that loves to play.

A properly socialised Scottish terrier thoroughly enjoys playing ball games and these are an excellent way of letting the dog expend its vast supply of energy. He loves familiar companionship and will enjoy walks with his family. A leash is necessary though, as this breed is prone to dashing headlong into traffic if it spots what it considers to be prey. Obedience training is essential to tame the breed’s natural inclination to think and act independently and constant reinforcement of authority will be needed.

The Scottish terrier’s high level of intelligence is matched by a remarkable ability to store information that distinguishes friend from foe. It will instantly recognise familiar footsteps, a distinctive cough and, of course, a voice and will respond according to association. Trouble will be met with a harsh and threatening bark and a stance that warns the unwelcome not to approach. The warning is backed up by a fiercely brave heart that never considers surrender, which makes the Scottie an excellent choice for guarding a home.

The independent character of a Scottish terrier is best suited to indoor living, as it could attempt to dig its way to China, or simply decide to go off adventuring for a while if left in an outside kennel. This independent thinking makes training a challenge, but not an impossible one.

The Scottish terrier is not a dog that appreciates aggressive training measures. It will generally perceive this as threatening and respond with its usual fighting spirit. Despite this, the breed has an inherently gentle nature and will respond far better to positive reinforcement. The challenge is to channel its natural inclination not to be dominated into an acceptance of a partnership rather than a master/servant situation.

The Scottish terrier is the William Wallace of Scottish canine breeds and will offer huge resistance to having its independence threatened. It is a trait that makes it both adorable and frustrating, but if the dog can be persuaded to accept that there are rules to be followed when joining humanity, it will prove a constant source of joy, which makes a few idiosyncrasies well worthwhile.