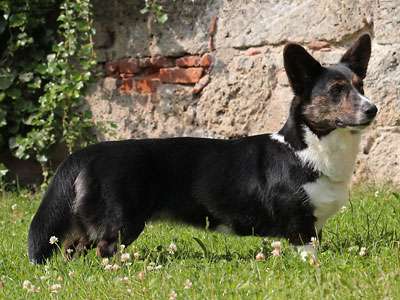 There are two subsets of corgis: the Pembroke Welsh Corgi and the Cardigan Welsh Corgi, a division that only occurred in the 1930s. The cardigan corgi is thought to be closer to the original breed, dating back to 1200 or so. (Both breeds gained the recognition of the American Kennel Club in the 1930s: the Pembroke corgi in 1934, the Cardigan corgi a year later.) They are sometimes called ‘Yard Dogs’ because average specimens measure a Welsh yard from the tip of the nose to the end of the tail.

Corgis have been part of the Welsh farming community for over 3,000 years, which makes them one of the oldest dog breeds and puts them amongst the earliest known instances of working dog. They were cattle dogs, helping to herd the cows, guard their homes and hunt vermin. Their short legs were useful as it allowed kicks from grumpy cattle to sail safely over their heads. Corgis are often still used as working dogs today.

Corgis are very active dogs, and the Cardigan corgi needs even more exercise than Pembroke cousins. Along with a great deal of running about, Cardigan corgis must be taken for a lengthy walk every day. It is important that the dog is leashed for this walk and that the human leads the way. In the corgi’s mind, the one in front is the leader and the human must assume this position if he or she does not want to lose the position of ‘pack leader’ in the mind of the animal. Having said this, corgis can and do survive well in apartments and without access to a yard or garden, but they can become restive and hyperactive if not walked enough to burn up their excess energy.

While Cardigan corgis are excellent and loving family pets, they can be a difficult choice for a busy family. They tend to be loving and obedient, eager to please their owners, but they crave a firm hierarchy (they must see their humans as being the top of the heap!) and will not accept rough or poor treatment from children, defending themselves if they see the need. Corgis do best if they are well socialised when young, as otherwise they can be a little defensive and wary of strangers. They tend to get on well with non-canine pets and animals, but can, again, be quite defensive and combative with other dogs. Sometimes corgis can become attached to just one member of a family, eschewing the company of the other household members.

Physically, corgis are easy to recognise, being very short-legged dogs. (Despite their appearance, they are not particularly long-backed, but their short legs give this misleading impression.) Their tails are often longer than their legs, held low and heavy. All corgis come in a multitude of colours and this diversity is particularly welcomed in the Cardigan variety by breeders and shows, as long as there is not a predominance of white on the animal. Colours can include: red, tan, black (or sable) and even a lovely greyish silver. Brindling can often occur with corgis, in a combination of these colours. Corgi coats are thick and soft, and they can shed quite badly. Their coat actually consists of two layers, probably due to years of the inclement Welsh weather: a thick, soft insulating undercoat and a waterproof, outer layer of long coarse hair.

Corgis can easily become overweight and this can cause severe back problems in the animals, due to the comparative discrepancy between back and leg length. Therefore, it is important not to allow the dogs to become obese or inactive. Some corgis tend to have eye issues such as glaucoma and progressive retinal atrophy (PRA): chronic, degenerative conditions which will need palliative care for the rest of the dog’s life. Back problems, even in corgis of a healthy weight, are also found often in this breed.